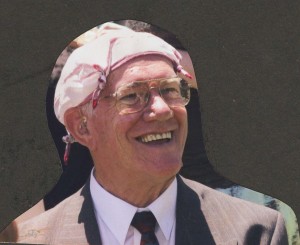 My Opa passed away a few weeks ago. He was a good man, a very generous man, a man with an awesome sense of humor and above all things a man who knew the Lord intimately. When he was about 30 years old he and my Oma migrated from The Netherlands to Australia, with their two young daughters, they believed Australia offered the potential of a better life then post WW2 Europe did, but their decision was no doubt a very difficult one as they left behind everyone and everything they knew.

Jess and I flew back to Australia for the funeral and I was asked to share a Word for it. I preached from Matthew 16, which is Peter’s confession of Christ… where Jesus asks him directly ‘who do you say that I am?’. It’s so easy for us to dodge this question, to avoid it by citing the failings of the church, the misinterpretations people have of scripture or the ridiculous ways some Christians act. But at the end of the day this is the key questions, everyone of us have to figure out what we believe about Jesus. CS Lewis says that He is either a Liar a Lunatic or He is Lord, he cannot just be a good moral teacher…. he must be either far less then that, or supremely more. My Opa knew what he believed about Jesus.

It was a special time to be with family and friends and to celebrate the life of a man who lived it so fully and well. I’ll miss you Opa, thankyou for so much that you gave me and taught me.